War against War. Serhiy Vovk and Iryna Nykonchuk about how the Ukrainian information army works 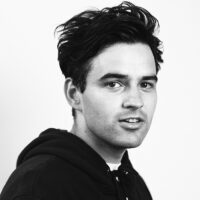 Closing the sky, providing air defense systems, instituting a full embargo on Russian resources, sending Ukraine more weapons, and forcing Russia to stop the war – these are the political decisions being discussed. But before making a final decision, western politicians examine the dispositions of their constituents. And it is these constituents that our information regiments are working with in order to expose Putin’s crimes to the whole world.

Serhiy Vovk, a co-founder of KAMA [Kyiv Academy of Media Arts], and Iryna Nykonchuk, a showrunner of 1+1 Production, created the information army of Ukraine – War Against War. After a week they received the support of the Ministry of Culture and Information Policy of Ukraine and they became one large team. After another week, they received a mention in The Rolling Stone and recently Adweek wrote a piece about them. Here, we relate how the information army is organized, what their sources are, and which messages they use. And, of course, what we are going to do in Chornobayivka after our victory.

Where were you when the Russians launched their full-scale invasion?

Serhiy Vovk: A week before it happened, during the time between our film projects, we traveled to Asia to rest for a bit, because the six months ahead were completely booked. We were coming back to life after the jetlag for another week. On the morning of the 24th, even before everyone in Ukraine was made aware, we found out about the beginning of the war between russia and Ukraine.

Iryna Nykonchuk: propose ourselves not as a creative army, because the entirety of our army is creative (even the grandma who threw jars at the enemy drones from her balcony is). We are ₩AW (War Against War), the army that guards our information front. And it is our first-class editing directors who are our snipers.

Serhiy Vovk: Our team is made up of around 200 members. It is a huge group of people from various fields: we have people who, in times of peace, worked for advertising agencies, people who made movies, people who worked on television. One of our regiments is made up of the entire staff of the I am IDEA creative agency. We haven’t worked with other creative groups yet because so far, we have enough resources. For a month now we have been working only with volunteers, but we are currently seeking international support and grants.

Iryna Nykonchuk: It all started on the second day of the war. Back then our team was only eight people with whom we had just finished our last project. During the first week, our team grew to be 150 members. One of the key assignments was to set up our processes. We decided to do so using the principles of newsrooms. We have entire units, clearly coordinated amongst themselves. Those are:

Our editors meet every day to set the daily agenda: we are assigning tasks to our authors, screenwriters, and journalists. Then, they go to work with other units, after which we receive the finished product which then gets distributed.

Why the army formed

Iryna Nykonchuk: Being in a safe place, we wanted to do as much as we could to help our people and our country. We saw the demand for information among our friends in Ukraine and abroad. They could not get their heads around what was going on, they needed to be informed. So we decided that we had to create a team which would share factual information about Putin’s transgressions with the West – this will remain our mission. We chose to spread information in the form of videos – the most easily digestible form of communication.

Iryna Nykonchuk: A large part of our team is still located in Ukraine, working from bomb shelters. Some of them would leave their homes for the night, with only their passport, knife, cell phone, and credit cards, and then never return. We are currently trying to find ways in which we can increase the support for people who are working with us. We want to provide them with safety, good working conditions, and help them with their relocation.

This work is helping us get through this, because we are not in the position of an observer, we are on the offense, we are defending Ukraine.

Our work typically takes about 15 hours a day. Olya Shevchenko, our post-production director, says that she does not have enough time to eat and walk her dog – she constantly has work to do. This also helps people survive.

Oftentimes, team members are not available. It is especially difficult when they are involved in some key processes. This becomes a problem, but we pick things up and find a solution.

How they choose messages and topics

Serhiy Vovk: Information producers are monitoring all the local and global news. Then, we discuss them at our daily meetings, after which we formulate daily and weekly agenda with messages which we want to promote. We pay attention to what the President says, and we support his messages, but in our experience, there have already been a few times when we were ahead of the global agenda and raised the issues before the world even started discussing them at large. This is a power of our team, and the multitude of talents which we have gathered.

Iryna Nykonchuk: We are monitoring the information environment 24/7. Julia Hrebenyovska, one of our teammates, thoroughly follows the daily international agenda with regard to Ukraine, and she often sets trends within the Western messages that we then promote. We also follow the Ukrainian events closely. Then we handpick urgent/critical situations, as it has been with Mariupol lately, and we work in that direction. We also coordinate with our partners at 1+1 Media, with the Office of the President, and the Ministry of Culture and Information Policy. They also share their viewpoints with us, and we mutually support each other’s initiatives.

How they measure their effectiveness

Iryna Nykonchuk: Since we’ve only existed for 25 days, we measure our effectiveness by the key targets we work for. For example, when we talk about the western targets, we focus on the crimes Putin has committed, promoting important messages about Ukraine’s integration with Europe, and about the cultural heritage of Ukraine being destroyed. We also measure our effectiveness by the scope of coverage, shares, and publications we get in western mass media. Recently, Rolling Stone magazine wrote about us.

As for the Ukrainian targets, it’s all very simple. We usually make positive videos which inspire people and lift up their spirits.

We measure effectiveness here by looking at the impressions of a given video on social media and the attention it received from mass media. And, of course, the comments under the video, such as: “Thank you, you have made me feel better”.

Serhiy Vovk: When the State Emergency Service of Ukraine and [President] Zelenskyi share your video, you know you are doing everything right and your goal has been achieved. When Slava Balbek shares our video and it gets over 1.6 million views, we know we are doing things well. And, of course, we check google trends. The topics we make posts about always start trending.

Iryna Nykonchuk: We observe and research the way how the propaganda machine works in Russia, we have a joint project with 1+1 Media called Russian fakes, where we debunk all their fakes. Huge Russian channels with 100 million audiences have been engaged in their propaganda.

Serhiy Vovk: Their propaganda army works better than the russian military army, because the Armed Forces of Ukraine kick the asses of the latter. But we are actually watching what they broadcast and we are actively fighting the bullshit they put on air. We convey common sense, as opposed to what they spread in their fucking media.

The most successful messages

Iryna Nykonchuk: The most successful creative work in the Western part of the world is Putin’s Crimes in Ukraine. The most popular section in Ukraine is “Good News”. And nowadays in general the agenda is to make videos that are more positive, calming people down stylistically and musically, encouraging and giving faith and hope not to give up. Just like each member of our team doesn’t give up every day, our goal is to encourage each Ukrainian not to give up as well, and to fight up to our victory.

Serhiy Vovk: Our task is for us not to become another Syria, Chechnya, Iraq, Afghanistan, and not to leave the first columns and news feeds of any media in the world. We are constantly producing content so that they can see what is happening here. We have key points that we are talking about: Mariupol, Chernihiv and others, we are working to show the horror of what is happening, to stress that this is a real genocide of the Ukrainian people.

Iryna Nykonchuk: We mainly publish in Ukrainian and English. We also have videos in Polish, German, French, Hindi, Chinese and Arabic.

How to be creative in the war conditions

Serhiy Vovk: This is not a problem for us at all. Sure, there are some comfort issues, availability of the Internet and electricity – but overall these are the only issues we face. And so I told our 10,000 graduates from KAMA that the Ukrainian nation is really the most creative in the world, and now we are not just defending ourselves on this front, we are even attacking and knocking them down non-stop. Our team remains wildly creative even in these circumstances, and it comes out brighter than it could have ever been in peacetime. Because now the wire is bare, and it is sparkling, and everyone is sparkling with ideas like crazy.

Iryna Nykonchuk: As an editor-in-chief who reads all the scripts and makes corrections, surprisingly enough I do not see any creative blockers which might normally appear in peacetime. You know, when something goes wrong and you think you need to sit back and wait for the inspiration to kick in. Now the authors are generating ideas and writing at a rapid pace, and same goes for the editing directors, who are also our key authors. I’m saying this to stress the fact that no concern or any kind of anxiety is hampering our process of creativity. We do not face any at all.

We have the power to be creative, because we know what we are doing, we are defending our country and fighting on our own front – and this is the key incentive and motivation to stay creative.

Serhiy Vovk: We can even share some insider information. We have a regular column on Instagram – counting down the days of war. And we can’t do it in advance, because we are so positive that we hope every day is the last day of the war, and it will be [the day of] our victory. That’s exactly the motive that sparkles in the hearts of our team.

About Chornobayivka as a possible venue for the Cannes Lions 2023

Serhiy Vovk: It seems to us that Ukraine will become not only the center of Europe, with our main goal being to bring Ukraine to the forefront in every sense. We hope that after this precedent with the attack on Ukraine, with our victory, we will be able to dictate the conditions of the new world order and tell people, based on our success story, what is there to come. The Cannes Lions, the Cannes Film Festival, the Oscars, whatever, you name it, are going to take place in Ukraine. And they will be honored to be hosted in Ukraine.

This is how we see things, and this is how I think every Ukrainian feels. Because the Ukrainians are now the coolest nation, and all people in the world know it. And the russians are kicking themselves, realising that they have picked the wrong battle. Glory to Ukraine!